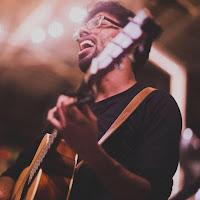 It's been a few years, but Boston-based singer-songwriter Prateek is back! A lot has been happening over the last few years, including the release of his debut album, “The Band’s All Gone,” a live recording at Q Division Studios. We also look at his newest single, “Wrong” and the difficult time from Prateek's younger days that inspired the song.

Prateek has been public about his struggles with mental illness, and in this interview we take a deep dive into it. He talks about how it's affected him as well as the help he's gotten. One of the takeaways from this discussion is that help is always available.

We also look at the last year and it's impact on the Boston music scene. Prateek talks about a year without shows and how he's moved his creative energies in new directions, including establishing a Patreon page and doing a number of livestream shows.

After this, enjoy two of Prateek's singles, “All The Stars,” followed by “The Gang's All Gone.”
Posted by Citywide Blackout at 10:19 AM