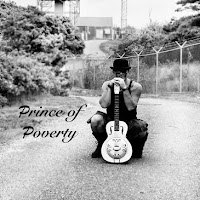 This one has been a long time coming. I've been a fan of Kristian Montgomery and The Winterkill Band for awhile now, and in this episode we get to hash things out for his newest album, “Prince of Poverty.” It's one of three recorded during the pandemic and this fall he'll release “A Heaven for Heretics."

Kristian has been a part of the Boston Music Scene for some time and talks about the way he fits in (and sometimes doesn't). He talks about the challenge in getting noticed in the U.S. while at the same time he's become well known in Europe. He's also done shows over there and shares some tales about the audiences and what they're like.

We also do a deep dive into his newest album, “Prince of Poverty,” released earlier this year. The album touches on a lot of different subjects—from judgement over the past to America and how he views it.

After this, enjoy two songs from the new album, “American Fire” and “A Warm Grave.”
Posted by Citywide Blackout at 4:52 PM