4 Minutes Later talk about the Tweet that launched their career 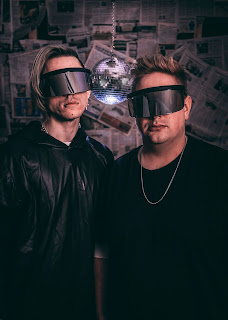 It all started with a Tweet that read “Music Coming Soon.” Those three words kicked off a flurry of guesses as to who 4 Minutes Later really were and what they were all about. After three years, Junyor and Moon got to unveil this new project, a blend of styles called Alien Pop.

In this interview, we talk about the group's origins, what it was like to keep a secret for three long years, and how it felt to finally tell the world. Junyor and Moon explain to me what Alien Pop is and how past projects influenced their current style.

I'm not that familiar with the music scene in Canada, and Junyor and Moon walk me through it, introducing artists that they've worked with and others that I'm dying to check out.

Following this, kick back and relax with the group's new single “In My Head.” It's the first song of theirs that I heard and led me to checking out their entire discography.
Posted by Citywide Blackout at 11:03 AM