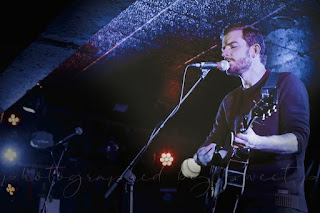 Who says that the pandemic can't have a silver lining?

Michael Cooke's career in the stage and screen was well underway (including a role in a new Netflix movie!) when COVID-19 brought such productions to a screeching halt. Undeterred, he decided to use the free time to learn the skills needed to break into music. The result—his new album, “Doin Alright,” a powerful and uplifting collection of songs.

Michael and I dive deep into how his foray into becoming an Olympic athlete led to working on dozens of plays, films, and television shows. He talks about meeting one's heroes as well as those in the industry that he'd love to work with.

We also look at his debut album, and his first time in the recording studio. Michael talks about the message he hopes to pass on through his music.

Following this interview, enjoy “Loosing My Mind For Nothing,” from the debut album.
Posted by Citywide Blackout at 11:16 AM