Zachary Kibbee shares how his work has been featured in movies, TV, and much more 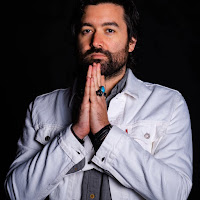 If you're a fan of the Marvel series of shows, then odds are you've heard the work of Zachary Kibbee. He's my guest in this episode and his work can be heard in over 100 shows, movies, and ads. We talk all about that and the changes that it allowed him to make, including quitting his day job and becoming a full-time musician.

Zachary's got a new album out, “Life in Low Fidelity,” and we look at some of the new sounds he's using, with much of the work done in his home studio. It's a big investment, but one that he said paid off big time in allowing him more freedom when it comes time to record.

Following this, I've got a track off the new album, “Somewhere to Put My Gold.” I really loved the intensity and diversity of sounds he uses, and as he said, you can't just keep making the same song.
Posted by Citywide Blackout at 3:21 PM