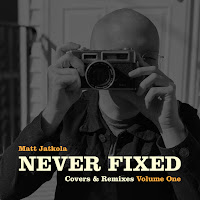 In this episode, I'm live with Boston-based musician Matt Jatkola for his new album, “Never Fixed.” The album is a collection of covers and remixes featuring artists such as Teagan and Sara, Cyndi Lauper, The Bee Gees, and Soft Pyramids. He talks about the different roles that the artists played, whether it was contributing to his own style or being a valued friend he's had over the years.
After the interview, enjoy two songs from the album, “I Was A Fool (Tegan & Sara Remix)” followed by “Time After Time (Cyndi Lauper Instrumental Cover).”
Posted by Citywide Blackout at 1:16 PM