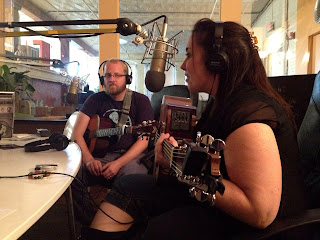 We bring June to a close with Ryan Wilcox and Joe Pisco of the indie rock band 33 Leaves. These guys, along with fellow band member Dan Bates, have been hard at work on the tunes for their third album, and have a free gig coming up at the Chit Chat in Haverill.

Following that, we talk to Kim Jennings and Dan Cloutier, singer-songwriters and co-founders of Birch Beer Records. Kim has just released a new album, "Here Now," and she and Dan entertain us with a great acoustic set!
Posted by Citywide Blackout at 7:02 PM