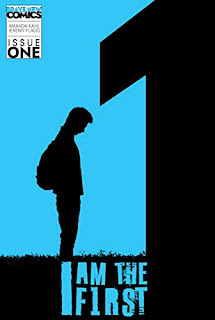 The recently-released comic series “I Am The First” is a powerful story that touches on subjects like bullying, grief, and even suicide. But there's another message as well—that hope is still out there. The comic is the brainchild of author Jeremy Flagg and working with illustrator Amanda Kahl, they have created a story that has resonated with readers in a number of ways.

In small-town Maine, standing out in a crowd can be dangerous. Alec hasn't had an easy life. After his father died, his mother married Don to help make ends meet. What she didn't know, her second husband would turn into an alcoholic leech. Worst yet, his drunken rages are directed at Alec, the son he never wanted.

To make mattes worse, Alec has a secret even he doesn't understand.

Then there's Roxanne, a friendship that fell apart as Alec struggled to cope with the death of his father. Despite the walls he's erected to shield himself from the outside world, Roxanne is determined to be more than a sidekick in his life. So when the comic book aficionado discovers her friend has gifts beyond the average lanky-teenage boy, she is determined to teach him what it means to be a hero.

In this interview, Remy and Amanda talk about how they came to work together on this project. Amanda dives into the process of creating the visuals while Remy shares the challenges of being a novelist and writing something where brevity is they key. We talk about the different messages behind the series and the response they've gotten from readers. The series is currently in issue 2, with the third to be released later this summer.
Posted by Citywide Blackout at 9:37 AM