Marc Bernardin shares the diverse, detailed world of “Adora and The Distance” 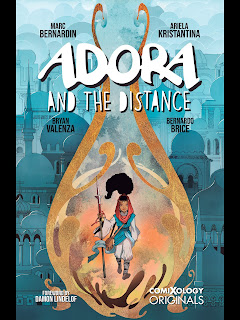 Recently, I had the chance to read the new graphic novel “Adora and the Distance,” available exclusively through comiXology Originals. It was created and written by Marc Bernardin, who has a lengthy history in television, journalism, and comics.

“Adora and The Distance” is an amazing story about a young girl named Adora who faces a violent force called The Distance, a city-killing threat. Rather than wait for it to bring an end to her home, she and a group of adventurers set on a quest to stop it.

The story is years in the making, and Marc and I talk about how it came to be and the hurdles faced pitching it to publishers before connecting with comiXology. “Adroa and The Distance” is inspired by Bernardin’s daughter who was diagnosed with autism as a toddler, and we talk about what it's like raising a child on the spectrum and how they're often portrayed in media.

Marc and I also talk about the team he worked with. This includes Ariela Kristantina (Illustrator), Bryan Valenza (Colorist), Bernardo Brice, (Letterer), and legendary comics editor Will Dennis. I learn how they worked to create the vivid, lush world found in the pages of this comic and how it even influenced some of the story.
Posted by Citywide Blackout at 8:30 AM