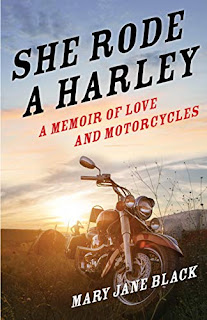 Editor's Note: This is a weekly collection of mini-reviews of music, books, comics, movies, and more that I've enjoyed. Unless indicated, no one has requested a review, but I am open to submissions or suggestions, which can be sent to citywidemax@yahoo.com.

Books
“She Rode a Harley,” by Mary Jane Black
When I first picked up this book I thought, “I'll just give chapter one a read”.....a moment later, I had finished the third one. That's it. That's how I knew this one was a keeper. A story of second chances, unexpected love, and loss, this story pushes a lot of buttons for me, and I can't wait to see what comes next.


Podcast
Wolverine: The Long Night
Comic fans will definitely want to check this out! While it's not the usual “battle for the fate of the world,” the story is compelling and draws you in from the first episode. The voice cast is stellar and the audio quality is perfect. Add in great music and sound effects, and it brings the story to life and had me tearing through this 10-episode series.


Music
Jamie Hart—Get Closer
This new single from Jamie Hart has a pretty relaxing effect at first, but that changes pretty quick, as this song has a lot of power to it, with a strong, measured tempo and intense vocals from Jamie. This release follows a pretty tumultuous time in Jamie's life and that emotion really fuels the music.

Time and Place—Ships That Pass (requested by the band)

The new EP from Boston-based Time and Place is an intense punk/rock offering that hits you hard from the opening and track and doesn’t back down. Described as “five pals who can clear a room faster than a fire alarm,” I'll be among those who'll stick around after that alarm gets pulled. This brings me back to basement shows in Boston or some of my earliest concert experiences on the South Shore, when plenty of my friends were in punk bands. Savage instrument work combined with “don't give a damn” vocals makes this one a solid recommendation.

Jakals—Belted in and Taking It

I'm a longtime Jakals fan, so of course their new single gets reviewed. Vocalist Katie Solomon shows a great range in this new song, beginning with a mellow, almost brooding tone that shifts as the song proceeds. The feeling that comes from seeing the cover art of a figure on the docks on an overcast day is really captured in this song.
Posted by Citywide Blackout at 5:52 PM