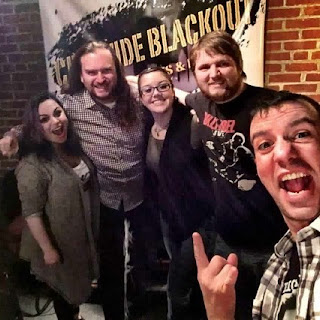 It's a reunion show on Citywide Blackout! Jeff Royds returns to talk about the latest news from his band Bullethead, which includes an upcoming CD release. Jeff also talks about his many posts online regarding advice for musicians, whether that's how you interact with the crowd or the importance of getting out and going to shows. We have such a good time, Jeff decides to stay for the rest of the show.

Hana Khan returns and she has a great new campaign to talk about. Called "You Are Enough," it's going to be launched this spring, coinciding with an upcoming single and article. In this campaign, she incorporates her own experiences in dealing with mental illness and the science behind it with the goal of helping others in the same situation, with the message that they are enough and they can achieve anything.

Up next is author Curtis Lawson. He has a new book to talk about, "It's a Bad, Bad, Bad, Bad World," his new comic "Mastema," which she wrote with Marvel Comics author Nico Leon, and the return of one of his earlier works, "The Devoured," which he was able to get back the rights to. We talk about his foray into audiobooks, the legal side of writing and what kind of villain he would be.

Closing of the show is Amanda McCarthy, another former guest making a big return. She's redone her Grammy-nominated song "Bad News," and we talk about the work that went into that, the best kinds of road food, and her upcoming shows.

Posted by Citywide Blackout at 7:45 PM