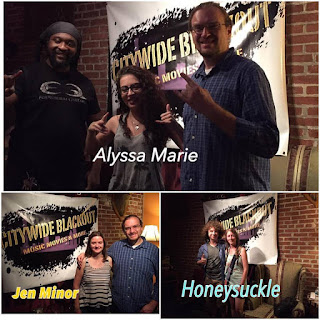 Author Justin Bell got his start writing a fiction series based on the G.I. Joe television and comic series. This was such a great success, he moved on to his own sci-fi series, Operation Harvest, which chronicles the work at GenTech and the bizarre science that comes from it.

Hip-hop artist Alyssa Marie just released a new album, "Louder Than Words," and in between playing some of the sick beats, she talks about her dedication to her work, how it drives her, and where it all began.

Jen Minor is a huge fan of Freddy Mercury, and on Aug. 10, she's organized an amazing tribute show at Oberon to not only celebrate his work, but support some wonderful charities. Jen shares some of her favorite Freddy songs and how he's inspired her own work as a songwriter.

The band Honeysuckle has just returned from a stellar performance at the Lollapalooza music festival and we hear the whole after-action report of the artists they saw while they were there. Plus, they share the details of their recent album release.

BONUS: Our Blackout Bootleg series from Outside the Box continues with Charlotte Dore, founder of Rosalita's Puppets, as she talks about she connects with young audiences, and the many puppets and marionettes she's made by hand over the years.

Posted by Citywide Blackout at 11:06 AM