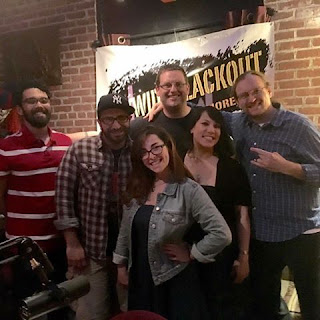 NOTE: The May 31 show that R.D. King was scheduled to play at has been canceled.

Instrumental musician R.D. King opens the show with some beautiful acoustic songs. We talk about the journeys he's taken and how they've become woven into his debut album and how people interpret his music.

Next up, Monica Leap of Studio 550, located in Manchester, N.H. joins us. Her studio has classes galore, from stained glass painting to martial arts. Currently, they're running a Monster Hunt were people craft clay monsters and leave them all over the city for people to find. Along with the varied classes, Monica shares how they work with those brand new to the art world.

The Dirty Dottys start off the second hour with some never before released tracks for Citywide! They've also got a new album in the works, and a Kickstarter campaign with some amazing prizes.

The metal band Chuggernaut keeps the new music rolling on! They've got a new EP, "First Batch," and they share the stories behind the songs, such as the many attempts to find the perfect opener for "Beer Mountain." They're also going on tour this summer, with spots in Connecticut, Tennessee, and New York.
Posted by Citywide Blackout at 7:25 AM