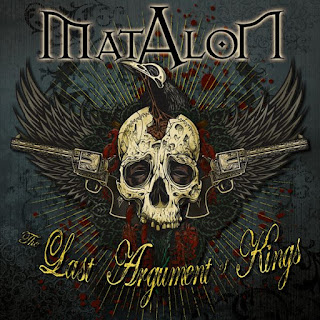 It's been five years since Matalon played their first show at the Model Cafe. Their driving, hard rock sound has brought them from the dive bars of Allston to the main stage of the 2012 MassCann Freedom Rally in the Boston Common. A five-piece when they started performing as Matalon, brothers and founding members Scott and Craig Matalon soon found that they were still able to get the same raw energy as a power trio when Chris Eskola (former The Newtz, Face of the Sun, Pipe) joined the band on bass.

Matalon will perform three shows in the weeks following their release of The Last Argument of Kings. The first will be a benefit for Brenda Wynne at the Brighton Music Hall on Jan. 5. Brenda was victim of a hit-and-run on Brighton Ave. in October. Though she is doing better now, she was left with lasting injuries and mountainous hospital bills. The driver is yet to be found so Brenda has no action of recourse. Brenda has been a huge supporter of local music and the arts over the years. Joining Matalon on the bill for this show is Raging Teens, Johnny Carvale and the Juke Joint Rhythm Rockers, Skeleton Beats, Razors in the Night, Cradle to the Grave, and White Dynomite. Matalon will be at Firehouse 13 in Providence on 1/12 with Hemlok and Zodiac Union and then in Manchester on 1/19 at Milly's Tavern.

It is clear that Matalon's live performance is their forte. This is something they've managed to effectively capture in their debut album The Last Argument of Kings. The entire album was recorded live at their home (aka Music Lane Studios). They chose to mix it there as well with esteemed Boston engineer Benny Grotto (Arosmith, Mellow Bravo, Gozu). This 13 song album has mostly new songs as well a few songs Matalon has played since they began. These songs include crowd favorites "Haulin' Ass" and "Jesus" which have evolved over the years and really developed into highlights on this album.

The Last Argument of Kings is dedicated in loving memory to Andrews Claude, one of Scott and Craig's oldest friends. He was a "genius handyman" who worked with them on tons of artistic projects throughout the years. Andrews was a major force at Occupy Boston (he was the guy with the giant sink) - one of those rare individuals who lead a crazy, super-interesting life and helped a LOT of people during his time here on this planet.  Andrews passed away on April 6, 2012 from epilepsy, compounded by the effects of being hit-and-run a few years ago.

The song "Ugly" is their first release off the album. They chose this song to release because it is a perfect representation of the music on this album. Fast paced, no BS, straight up Hard Rock. The download links to "Ugly" and album artwork are above.