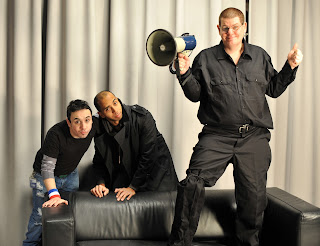 The 2012 D.I.Y. festival, dubbed “Experimentally ILL FIVE-ever,” kicks off Dec. 5 at the historic Somerville Theater, followed by a second show, at Brookline Access Television’s theatre on Dec. 6. The filmmakers return to The Somerville Theatre on Dec. 7, before closing out the four show series the following week, with a screening at Brookline’s famous Coolidge Corner Theater on Dec. 13. All screenings are from 7 to 9 p.m.. All tickets are $10, and are first come, first serve, unless otherwise noted. Seating is limited, so plan to arrive early. This is an independently produced event, put on by the Experimentally ILL production team, within the theaters’ screening rooms. This year’s festival is dedicated to the memory of the late Dawn Reger, an arts-lover, local performer and friend of the producers.

Experimentally ILL 5 is sponsored by friends at ExplosionBus.com, home of the new animated webseries from the team behind Comedy Central’s cult-hit “Dr. Katz: Professional Therapist:” comic Jonathan Katz and producer Tom Snyder. Explosion Bus episodes will screen at the festival, in addition to a pending lineup
of other shorts. “Explosion Bus” sees Katz and Cheers/Seinfeld writer Tom Leopold star as “two pathetic men who create a traveling talent show.” On that theme, Experimentally ILL producers O’Toole and Hollie are “two pathetic men who create... A film festival.”

“Most people assume the next Quentin Tarantino will emerge from the lofty trappings of Sundance, Cannes, or any number of prestigious film festivals. ...There are new filmmakers on the local scene hoping to find cinematic success without having to rub shoulders with Robert Redford,” as David Wildman wrote of “Experimentally ILL” in The Boston Globe last year.

O’Toole and Hollie’s film festival evolved out of a desire from the duo to reward quality creative efforts that may be overlooked by more pretentious “festival” outlets, “This is Experimentally ILL Five-ever, because, this is our fifth fest, but the ethos of what we’re doing shall go on forever. It’s a very D.I.Y. approach, and, to me, a “filmic” answer to punk rock. We aim to break the mold, gather a community of artists, and maybe help change the model of how film is interpreted,” says Michael Phelan O’Toole. "This is a love letter to small works with big visions, and those misfits we’ve met along the way. The energy of the audience raises the stakes. There’s nothing like someone shaking your hand and saying they dug the show, versus clicking the “Like” button on Facebook. It’s 2012! The end is near! See nontraditional films in a traditional theatre, while you still can,” concludes O’Toole.

Indeed, Sarah Shanfield, of Metro Boston, in breaking news of the first Experimentally ILL, wrote that “If you know Mike O’Toole and Lawrence Hollie from TV, you know that they make programming for
community access that isn’t always accessible. And hilariously so.”

In dissecting the film fests’ enduring ethos, Harry Vaughn of The Dig wrote, “In a time when film festivals, however indie-friendly they may appear to be, sell their souls to audience pandering, Juno-toting, Fox
Searchlight producers (read: Patagonia-wearing Sundance hipsters), it’s a relief to stumble into “Experimentally Ill,” a festival that actually dedicates itself to promoting out-there artistic video and
film endeavors.”

While the complete film lineups are still pending, this year’s festival boasts proud official sponsors, whose shorts will also be featured, including “Explosion Bus” episodes never-before seen on the big screen, psychedelic shorts from the “Reel Groovy Films” team, currently making the festival rounds with their grind-house epic “Planet Diva,” in addition to the work of writer/director Dom Portalla of Door Eleven Productions, who brings his latest short, “Nicky.”

Thanks to these official sponsors and additional contributers, “Experimentally ILL 5” is able to expand on the ambition of “screening movies that will leave some disturbed, and others refreshed and invigorated,” as Harry Vaughn last wrote.

Both Hollie and O’Toole are known as heralds of “The underground cable access TV scene... Bursting with edgy creativity!,” as David Wildman relayed in Time Out Boston last year, as recipients of separate “Most
Innovative” awards from The Alliance For Community Media’s video festivals. They have been advocates of collaborative media, and purveyors of unique video art, since 2001, being producers/performers in the community television shows “Random Acts,” an experimental variety program, and “Solipsist’s Dispatch,” O’Toole’s award-winning solo spoken word program. They are also known for their music video work with Boston/Ireland rock band All Echoes Return (ex-Midatlantic), who opened for Letters To Cleo’s hometown reunion show at The Paradise Rock Club in ‘08.

The previous editions of “Experimentally ILL” have been featured in The Boston Globe, Time Out Boston, Metro Boston, Boston Phoenix, The Dig and The Needham Times, among other print and web publications.


For more on Experimentally Ill, please contact Michael Phelan O’Toole at mikeovideo@gmail.com, and visit ExperimentallyILL.com.
Posted by Citywide Blackout at 7:13 AM