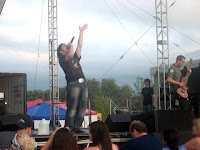 One of my favorite bands, StilRize, has just accomplished something huge! Recently, the band was signed to a seven-album contract with Roadrunner Records. Here's the article, written by yours truly for his day job at the Billerica Minuteman.

'Rizing' to the top

In the span of five years, local band StilRize has achieved some memorable milestones, playing alongside such well-known musicians as Papa Roach and Three Doors Down.

Now the band can add one more notch to their belts—inking a multi-album contract with Roadrunner Records, home of bands like Fear Factory and Nickleback.

StilRize consists of Travis and Andrew Deprey and Michael Ciardi of Billerica and Sean Timmins and his brother Dan from Lexington. Managers Steve Brega and Travis Deprey are also from Billerica.

The deal with Roadrunner got its start last Thanksgiving, when the band played to a packed audience at the club Church in Boston’s Fenway area. The music was submitted to the web site www.signmetoroadrunner.com, where it received considerable attention from fans, as well as Ron Berman, senior vice president of A&R for Roadrunner. Berman was in attendance at the show at Church, and two weeks later, contacted the band about signing with the label.

Currently, Andrew and Sean are in Nashville writing songs for the first album, slated to be released next summer. A tour of the U.S. and Europe is soon to follow. Among some of the people the band is working with are Skidd Mills, who has written music for Saving Abel, Skillet and 12 Stones, guitarist Brian Craddock of Daughtry and Andy Waldeck of Stone Temple Pilots.

Q Your band has been signed to a seven-album deal with Roadrunner Records. Is there any schedule you have to keep for releasing your music?

A Yes there is. We got into a stipulation, when we write the songs, it (the album) had to be released within a year, no matter what. There are some bands that are on labels and they just shelve their albums when they’re done. The timeframe in terms of the first album out, we didn’t get that in writing. Ron Berman, our guy, said by next summer we plan to have this album released and touring.

Q Was it always in the plan to get signed to a label like Roadrunner?

We’re still working, writing lyrics. It’s going to be insane. The last time we went to Nashville, we wrote with all these guys, write with one for four hours, then go to someone else and do it again.

Q Do you feel like you’re under more pressure to produce quality music than before?

A It’s pressure as in you got to try and write a hit every single time. Our guy Ron Berman thinks we’re capable of this and he’s expecting that. That right there is a big guy to look up to. It gets a little bit pressuring.

Local fans can expect a diverse range of sounds. They’re heard just soft and hard sounds from us. We’re going be having all sorts of influences, people coming in from two bands, Evanescence and Daughtry, and Nickleback’s producer all coming in. They’ll be co-writing with us.

Q How do you decide what goes into the album and what gets tossed?

Q Will some songs be shelved for future use?

A I think it will be, some songs you shelve and when the right time comes you’ll release it.

Q Any details on the upcoming tour?

A They’re (Roadrunner) looking at Europe and America for us. We haven’t toured, we’ve just gone on trips. A trip to Michigan for a week to play with 3 Doors Down, and a year ago we did a trip to play with Papa Roach. We’ve gone to Rhode Island, Florida and New York to do radio performances, but it’s never been nonstop touring, show after show, which is what we’ve been dying to do. It’s in our blood, but we’ve never been able to do it, or had the funds to do it.

Q Some bands prefer to follow the “Do it Yourself” method, rather than relying on a label. Your thoughts?

My thoughts on DIY are completely go for it and let’s do it ourselves, but it got to the point where it literally comes down to money. Someone has to be rich in your family or someone has to invest in you to go out on a tour. A label can throw out millions of dollars, you need funds to do it. As for DIY, I was all for it, until it got to the point where you can’t afford it. My advice is if the bands have the funds to do it themselves, do it.

Posted by Citywide Blackout at 12:16 PM