As the title says, it's dual Boston artists in this episode. Kicking things off is singer-songwriter Linda Marks, who has a brand new album out called “Monuments of Love.” Inspired by and written during the pandemic, the album touches on a lot of the last year, from the health risks we were all faced with to separation anxiety to lost moments with loved ones.

Linda and I talk about how she stayed creative during this difficult time, even hosting a regular livestream music series. We also look at how she completed two other albums, “The Piano” and “Songs at the Heart of Life” during COVID. Linda also has a big triple album release show planned for Aug. 1 at The Burren in Somerville. 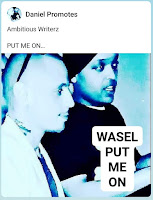 After Linda's interview, enjoy one of the tracks for the new album, “Prayers,” written for a musician friend who battled a hellish case of COVID but is now on the mend and singing once more.

Following this, I'm back with Daniel Promotes, and we also find ourselves chatting about the last 15 months and what it's been like for him. Daniel's also been hard at work joining Ambitious Writerz, and it looks like there's going to be touring in the near future. We look at the Boston rap scene and how it weather the pandemic, focusing on some artists who really made their mark with new releases during this time.

Posted by Citywide Blackout at 10:36 AM