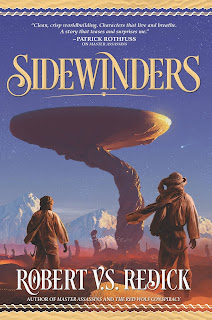 A few years ago at Boskone, I had the chance to meet author Robert Redick to talk about his book “Master Assassins.” Well, he's back with a sequel, “Sidewinders,” which hits bookstores on July 6 and in e-book format.
“Sidewinders” continues the story of the Hinjuman brothers, Kandri and Mektu. The story takes place in a lethal desert twice the size of the Sahara, and features giant man-eating spiders, nomadic shape-shifters, and carnivorous plants—all while the magical servants of the tyrant they have wronged chase at their heels.

Robert and I go into the worldbuilding from the first book and how he continued it in the sequel. We talk about the fantasy genre and its struggles with misogyny and how this has improved in recent years. Robert has gotten to travel quite a bit and we look at the places he has been and how it's influenced the book.
Posted by Citywide Blackout at 4:18 PM