Arechan's back on Citywide to discuss the final episodes of LUFF 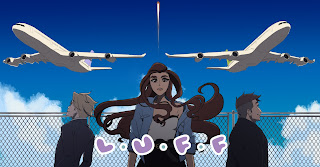 Arechan returns to discuss the final episode of her amazing LUFF series on Webtoon. This one is full of spoilers as we go in-depth on the final episodes. We talk about the story's conclusion and what it means for the cast, just what happens to them following the conclusion of LUFF, and perhaps most importantly, which guy was the perfect match for Beatriz Torres. We also look at the song “Someone Else's Deam” by Absofacto, which was used in the final episode.
Arechan and I also look at the meaning behind the series and the message that she hopes all the readers took away once LUFF concluded. She talks about the different directions that the story went in and how she planned it all out. She also talks a bit about some other ideas she's hoping to begin work on.

It's no secret that Arechan and LUFF have a slew of fans, and for this episode, we asked them what they'd like to know. The response was tremendous, as around 100 people posted questions to Instagram and Twitter. These include whether Beatriz, Daniel, and Julian enter into a polygamous relationship, the mixture of the romance side of the story with the political, and what led to her to pursue webcomics in the first place.
Posted by Citywide Blackout at 8:07 AM