Caitlin Garvey's debut novel looks at love, loss, and the meaning of moving on 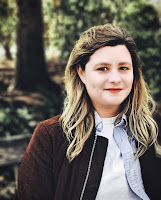 Author Caitlin Garvey's debut novel, “The Mourning Report,” looks at the passing of her mother and the
subsequent battles she had with depression and being admitted to a psychiatric facility after a suicide attempt.

In her book, she interviewed the people who were part of her mother's care, including a hospice nurse, a priest, an estate planner, a hairstylist, and a funeral director. If she figures out how they could function after being so close to her mother’s death, then maybe she can learn how to navigate her own life. Caitlyn shares some of the stories told in these interviews and what they meant to her, as well as what she thinks it means to “move on.”

This book is scheduled to be released in print and electronic formats on Oct. 6 through Homebound Publications.
Posted by Citywide Blackout at 4:51 PM