A Night of Celebrations at Johnny D's 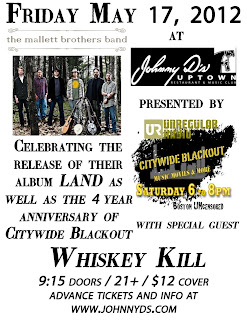 The stars have aligned and the country/rockers The Mallett Brothers Band will be releasing their new album, Land, at Citywide Blackout's 4 Year Anniversary Live Celebration. Whiskey Kill will also be joining them fresh off the release of heir new album, Wrecking Ball. A night of fun, exciting new music will be had by all with New England's premier arts and entertainment radio program presiding over the night. Hosts Max Bowen, Matt Zappa, and Tom Crossman will be joined by past co-hosts, special segment hosts, and past guests as we all enjoy a night for the New England arts community at Johnny D's, a legendary spot for music in the heart of Davis Sq.

Citywide Blackout began in a Quincy studio in May 2009 with creator Max Bowen working as sole producer and host. One of the first guests of the show was Matt Zappa, who later would become a co-host of the show. Little did he know at the time that his work as Drummer for the band Protein Collective, and local Metal expert would bring him to the Citywide Blackout team each week. In late 2011 Citywide Blackout moved it's show to the UNregular Radio Studio in Downtown Boston. With that move the show really began to take off, getting them more listeners, better guests and a reputation as the place to hear what's happening in the local music, film, literature, and theater scenes. With the addition of EC Promotions and Local Music 101 creator Tom Crossman in August 2012 Citywide Blackout has continued to refine their show and grow it's listener ship.

Coming off their recent 2013 New England Music Awards ‘Best Act - State of Maine’ win, The Mallett Brothers Band will be celebrating the Boston release of their highly anticipated third album, 'Land', on May 17th at Johnny D’s. The album is their first full-length release since 2011's 'Low Down', which helped them achieve a near sweep in that year's Portland Phoenix Best Music Poll and various awards/nominations throughout New England.

Land, produced by Jonathan Wyman at Halo Studio in Maine and mastered by Grammy Award winning Dave Collins (Synchronicity, 'Superunknown', etc.), is a ten song collection that offers a combination of the swampy acoustic sound in their 2010 debut as well as the louder, faster rock and roll heard in the 'Low Down' recordings.

In the midst of an extensive touring schedule, this first Boston area appearance of the band since January promises to be among the spring's most eagerly awaited events for country, rock, and all fans of live music.
Posted by Citywide Blackout at 10:11 PM