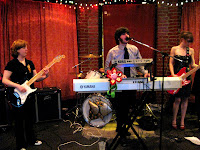 Ever get the urge to floor punch whilst listening to a keyboard player? Five minutes with the tunes of Only at Night, and that'll change, trust me.
The music of this Outer Space-based quartet is deceptively powerful. None have a particularly imposing presence, and their easygoing natures seem out of place with a band capable of getting even the most dedicated wallflower to move their asses. But once they hit the stage all bets are off as they rock from the opening note to the closing riff.
Vocalist and keyboard player Stefano Trafecante isn't just the bane of spellcheck-he's a surgeon on the keyboard. Okay, more like a surgeon with a Norse war hammer. He pounds the ivories, evoking a completely different response than most keyboard enthusiasts. At the band's most recent show at All Asia, the crowd was jumping , which was pounded out by Trefecante and slammed home by the accomplished trio of Danielle Leveille on guitar, JC on drums and Rilla Bailey on bass.
The music of Only at Night blends the smooth synthesis of Trafecante's voice and keyboard playing with the follow-up assault of Bailey, JC and Leveille's instrumental skills. In songs like "Save the World" a quiet, mellow opening soon gives way to a far more powerful second verse. Live, the band gets lost in the music, and the crowd soon follows suit. Metaphorically, they're like a dancer in the Bolshoi Ballet on a speeding bullet train loaded with 200 kilos of Semtex headed for a brick wall. In fact, I think that's how they got to the All Asia show.
The band's currently at work on their next album, but you can check out more of their music here.
Posted by Citywide Blackout at 7:51 AM