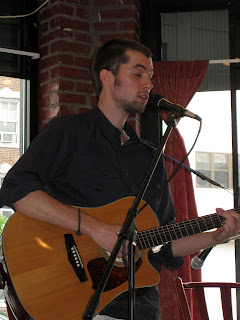 It's pretty rare when I can look at a musician and say, with no hesitation, that they "have it." I'm not sure what that "it" is-it could be a unique voice that captures the audience each and every time, or maybe an incredible writing skill. Maybe they're just accomplished hypnotists....

Whatever, Alexi Paraschos has it. I saw him on stage at a show I booked at the All Asia. I had seen a couple videos of his singing, and was thoroughly impressed, but what I saw online was nothing compared to the real thing.

We got a chance to talk before the show. Like most musicians, Alexi's got a laid-back attitude, and he doesn't put on heirs despite the fact that he has a talent I'd give my eyeteeth for. He doesn't take himself to seriously, and he's at home on the stage. He showed me his new idea for marketing his music-selling a 64 gig flash drive with music and photos. A pretty good idea if there every was one.

Alexi's music shifts from fast-paced beats to much slower songs that touch the listener, and it was with regret that I heard him announce his final performance for the show. Though he's got talent to spare, he's so casual and friendly that it's hard to feel intimidated by it. Rather, you feel like you're part of the performance, and it's one I hope to see soon.