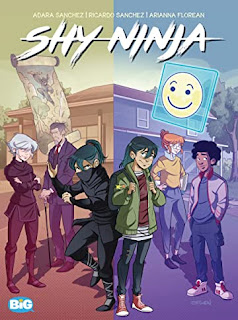 Opening this episode is comic writer Ricardo Sanchez, who describes the recently released “Shy Ninja” as a labor of love. It was his daughter Adara who came up with the concept, and the two worked together to further develop the story. Adara also made some amazing concept art, which is reflected in the work of illustrator Arianna Florean.

Shy Ninja is a graphic novel about a shy adolescent girl who finds her inner potential while combating her social anxiety disorder… at a local School for Ninjas. Young Rena suffers from social anxiety disorder. It keeps her from engaging at school, from hanging out with her best friend in person, or participating in any sort of group activity. Pressed by her mother to find some social outlet, she enrolls in a School for Ninjas as a joke—and in an instant, her life changes.

Rick and I talk about the origin of the comic as well as how he and Adara built the world of “Shy Ninja.” We look at working with Arianna Florean and the back-and-forth as the issues progressed as well as Adara's input for the art.

Following this, I sit down with WALLIS to talk about her new single “Another Day.” Her first song was a tremendous hit, with over 1 million views of her music video. We talk about the pressure of following up on that success, as well as the adventurous recording process.


After the interview, I've got the new song for your listening pleasure. I really dug the fusion of different styles.

Posted by Citywide Blackout at 4:17 PM