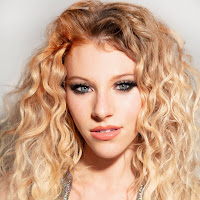 
Many musicians have a “to do list” for their music video, and in the case of Ariel Bellvalaire, it's playing guitar on the back of a motorcycle. In the video for her single “Elastic,” Ariel got to live this goal and a lot more. We talk about what went into making this video happen as well as the story behind it.

Ariel also shares her musical journey from Windsor, Connecticut, to Los Angeles and her time exploring the city's music scene. She's well known for her stage performances and talks about how she learned her acrobatic skills.

After this, Anushka Jag and I look at the music video for her song “Hurricane.” The song has a great sound, blending Indian music with electronic styles.

After Ariel's interview, enjoy her song “Elastic,” and at the end, I've got Anushka's single “Hurricane.”
Posted by Citywide Blackout at 12:37 PM