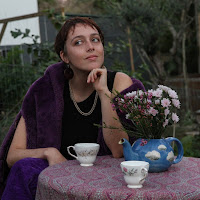 In this episode, Mykaela Jay talks about what led to her moving from Australia at the age of 19 and living and playing in Bolivia, Ecuador, and Colombia. This includes busking with a circus performer, and would eventually lead to her heading back home. She also talks about the many charities she has worked with, as well as the activist causes she has taken on, both through volunteer work and in her music.

Mykaela has released two singles so far, “A Dog’s Way Home” and “Purple Flowers” and her debut album “Mother Dearest” will be released early next year. We discuss the many people she's worked with and some of the impromptu additions that have been made to the songs. She's also returned to the stage and we talk about how it feels to be back before a live audience.

Following this, enjoy her single “Purple Flowers.” It's got a jazzy, soulful style that I really loved.
Posted by Citywide Blackout at 8:08 AM