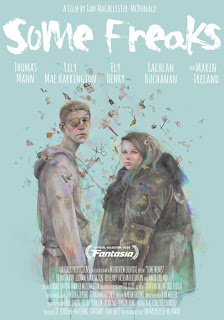 First up, R&B artist Genie Santiago is in the studio along with Lisa Finelli of Xperience Creative to talk about her new single, "Know Your Worth," which was released just last Friday. She's also got a new album in the works, and she shares her upbringing, the influence of her father, and what it was like moving around all over the Boston area as a kid. Genie's message of valuing yourself for what you are and not letting others define it is a powerful one.

Musician and artist Walter Sickert calls in for the new movie, "Some Freaks," which opened on Friday. He scored this feature length film about three friends transitioning from high school to college, and talked about the process of working with director Ian MacAllister McDonald. Walter has done scoring work before, and shared some of the scenes that really connected with him, as well as getting to see the filming process.

Hip-hop artist Syph rounds out the program with some amazing music from his fourth mix-tape set to drop by September. Syph has been making music for the last 10 years and has three other albums under his belt, which leaves us a lot to talk about.

Posted by Citywide Blackout at 9:59 AM