Brendan Boogie's Kickstarter for "The Mayor of Rock and Roll" 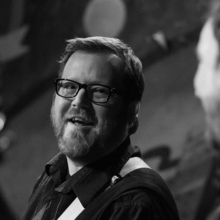 Brendan Boogie's already well-known for his career as a Boston-area musician, with eight albums and hundreds of shows under his belt. But before going into music, he had years of experience a a screenwriter, and directed the 2003 documentary, "Nobody Knows: Chronicle of an Unsigned Band."

Well film fans, Brendan is back with a new project, "The Mayor of Rock and Roll," the story of Boston musicians at various levels of  success wrestling with what it means to “make it” and how their rock and roll lives conflict with the real “adult” lives they (often reluctantly) have to live. The aim is to tell a funny, touching story about real people who happen to spend every waking moment being in love with making music.

A brief synopsis of the story: Simon Saint is a big fish in the small pond of the local rock scene who takes talented upstart Astrid Eliot under his wing. As their musical bond grows, Simon faces the ensuing tension from his non-musician girlfriend Samantha while Astrid's past is thrown in her face in the form of her nationally successful ex-boyfriend Keith, who returns to give her a glimpse of the big time. As they plan the biggest show of the year, Simon and Astrid are forced to face what they're willing to sacrifice to make their musical dreams reality. Of course, there will be lots and lots of music!

Movies aren't cheap to make, and even a small project like this has some hefty costs. Brendan is seeking $7,000 through Kickstarter to complete this movie, of which $1,460 has been raised. Brendan has 53 days remaining, and every dollar counts. Donations get you all sorts of great gifts, from music and film downloads, to being credited in the final product. Check out the link above and please consider supporting this great local artist!
Posted by Citywide Blackout at 8:30 AM