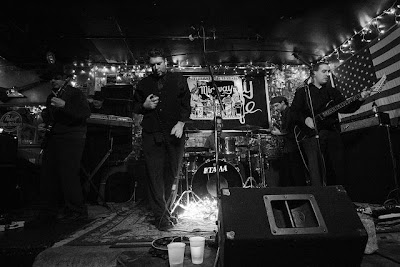 I’ve been a follower of the South Shore-based Totem since I went to see one their shows on a whim a couple of years ago. It’s an impulsive decision that I’m very, very glad I made. Right off the bat, I was hooked on their energetic live performances and diverse songs, and I try to catch their shows as often as I can.

Totem’s music has an array of sounds in its arsenal which really demonstrate the versatility of this band. Songs like “Carried Away” punch through the crowd with intense guitar and bass work and percussion that has every feet moving. “Grateful” takes on a lighter tone for a quieter, but no less impassioned, performance. This band always get a huge response from the audience, which shows the love by packing the house for all of their shows.

But along with a passion for the music, the members of Totem have a great appreciation for the fans. I often see them chatting with the audience in between sets, and they always greet me with a handshake when I arrive at the club. Totem books a lot of their own shows, and the bands they bring in (Cardboard Mercenary, The Timberfakes, Miss Fairchild, to name a few) blow me away every time. Clearly, these guys understand what it takes to put together a great show.