Lots going on at Exploding in Sound Records 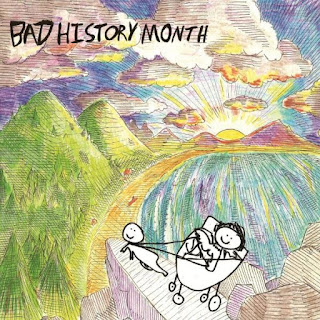 2013 is off to a great start and there's lots to be excited about at Exploding In Sound Records.  The label recently announced its first two releases of the year, Fat History Month's "Bad History Month" and Geronimo!'s "Buzz Yr Girlfriend: Volume 3 - The Metal David Byrne."

Fat History Month are going out on a massive tour in support of the record. Tour dates are all listed below.

Boston alt-folk anti-heroes Fat History Month are ready to unleash their second full-length, Bad History Month, unto the world via Exploding in Sound Records and Sophomore Lounge Records on April 1st. The new effort follows Fucking Despair, an album so beloved amongst its listeners that the Boston Phoenix created a category in their 2012 Best Music Poll to acknowledge its significance after a social media campaign garnered so many votes that it couldn’t be ignored.

Through years of toiling away at basement shows, members Jeff Meff (guitar/vocals) and Bob Hobby (drums) have redefined the conventions of what you think of a two-man band. They perform alchemy throughout Bad History Month’s 12 tracks and forty-minute runtime, transforming strung out guitars and disjointed rhythms into irresistible anthems. Fat History Month is a band that has mastered the ability to build tension and emanate fearlessness while doing so.

“Bad History Month,” the title-track and first single was recently praised by BrooklynVegan, Impose, The Needle Drop and more. The song is available to stream via Bandcamp [available on Soundcloud too].  The song serves as a welcome introduction to their idiosyncratic approach that lies somewhere between the slack riffing of Pavement and meditative noodling of Modest Mouse. The soft-to-loud dynamics make the most of vibrant guitars and feverish drumming to establish a tone all of their own. Amid the emotive vocal swells, the charming desperation to the lyrics outwits your favorite poet. Recorded by Dan Angel and James Ryskalchick and Mark Fede at The Sex Dungeon in Philadelphia from April-June 2012, and finished and mixed by Mark Fede at Bobby Hobby's Lobby in Boston July 2012-January 2013. The production illuminates with brilliant layering to highlight the deep underlying melodies.

Fat History Month share their thoughts on the record:

“Another heady conceptual brew from everyone's favorite nonalcoholic joke band that takes itself way too seriously. In case you didn't notice, the last one was a comedy album. This one is a tragedy.
Bad History not only means more songs about your Horrible Family, but it also refers to a feeling of ridiculously overblown and pathetic self-hatred, as in the case of that famous cowboy who, after falling off his horse, couldn't help feeling that in a previous life, he had been the first human to kill and eat a Neanderthal, an act which singled him out as the real life root cause of Original Sin, which has been borne throughout the ages by all of humanity ever since.

Aside from that, there are songs about the present, lonely, hi-jinx free Future of the modern world, the true nature of Hell, the comfort of a living room couch overwhelming the appeal of a life in the great outdoors, baldness as a metaphor for something or other, love and death through the wide open eyes of a crushed runaway cat, the deadly blackhole of passing time, indecisiveness about identity, narcissistic sadness over an early sunset, and a cannibal mind taking self-depredation to its logical conclusion. What's it all about? Who knows, but rest assured, it's intended as a deadly serious collection of deep ideas, a classic work of Art, deserving of thoughtful analysis for years to come.”

Pre-orders are now available via Fat History Month’s Bandcamp page.  The album is available on vinyl and digitally.  All vinyl orders include an illustrated lyric book drawn by Adric Giles! Trust us, you’re going to want the vinyl.

Chicago's favorite fuzzed out indie punk rockers are back with the latest installement of their cassette series, Buzz Yr Girlfriend, the first edition for EISR, Volume 3 - The Metal David Byrne.  The trio continue to expand their sound in new directions, and this EP is a monster.  Geronimo! are a rare breed, and this time around they're coming straight for your throat. Be warned, the new record is noisey, rowdy, and set to demolish all in its path.

This week saw the band release the EP's first single "Genius is Dead" which is available via Bandcamp and Soundcloud to stream and download. Check out what Austin's GroundFloorGo had to say about it...

"Genius is Dead" is the first single from the release and it's a fuckin' doozy. After a bulky display of clamoring drums, the track dives forward into a signature explosion of loud guitars and shrieks from Kelly Johnson. The track instantly reminds me of one of my favorite 90s bands in Mudhoney, but with more refinement in the way they organize their noise.

Buzz Yr Girlfriend: Volume 3 - The Metal David Byrne will be available March 29th to celebrate the five year anniversary of the Geronimo!'s first show.  You can pick up the tape at any of their shows and on Bandcamp for the fan friendly price of $2 (seriously) and digital will be available on a "name-your-price" scale.

The guys will be heading out on a Midwest / East Coast tour in support of the release.  Check out the dates below.  Many are still works in progress, and if you want to help out with any of the dates, you can email the band HERE.

OVLOV - The long awaited full length album is finally set to arrive in early 2013 on LP and digital!  Recorded with Grass Is Green's Michael Thomas III, we couldn't be more stoked to have Ovlov and the Hartlett boys part of our family. We've heard the rough mixes and have been blown away.  It's only a matter of time now!

If you live in the New York area, be sure to come out and support Ovlov on March 5th at Glasslands.  Ovlov were selected as support for PAWS (FatCat Records) first ever US show!

TWO INCH ASTRONAUT - The Baltimore boys are back with a new full length, and we're pretty damn excited to be a part of it.  The guys are currently mixing and mastering for a Spring release on tape, CD, and digital.  The songs are sounding fantastic and we truly believe Two Inch Astronaut are gonna blow more than a few minds.

Stay tuned for more info on Speedy Ortiz's full length debut and several other special releases!  Check out all tour dates below.

FIND EXPLODING IN SOUND RECORDS ON THE INTERNET: