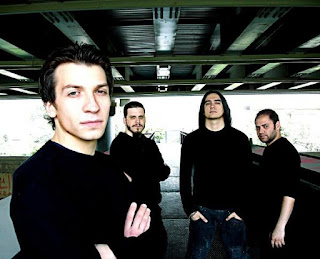 Bluntface Records is proud to announce the Dark Vision, a melodic/technical death metal band from Greece, has signed with Bluntface to be the official US promoter and label for their music. The relationship will start with Bluntface promoting Dark Vision's new album, Ingrowth

Dark Vision formed in 1996 and have been performing extreme metal ever since, starting off as a Heavy/Black six piece shaping into the straight Death/Black quartet of nowadays. The demo era-from 1996 to 1999- brought up several promo tapes that were spread to the underground network, marking their first steps into the scene.

The band recorded their first full-length album entitled Full Moon Shines during 2000, though its official release came two years later through NMC Records. A promo-track recording followed in 2004 which also marked the shooting of their first video clip (Signs From Fallen Stars). Numerous line-up changes slowed all activities until DARK VISION got active again in 2006.

Now being a solid four-piece act, D.V. released in 2008 a self-financed digipack CD entitled “Bestial Remedy”, including 5 tracks and revealing their new face; Death/Black through a modern Metal perspective.

Due to the band’s 15 years anniversary, the new album Ingrowth was released in April 2012 in vinyl form exclusively. While still expressing themselves in Black/Death Metal forms, D.V. added a groovy touch and a Rock ‘n’ Roll attitude to their tunes. A few months before the album came out, the band released its second video-clip for the song “King Of Emptiness”, introducing the visual interpretation of their music.

DARK VISION is a live act and have been since their first days, having shared the stage with well-established bands like Mayhem, Satyricon, Sodom, Rotting Christ, Septic Flesh,Ancient Rites, Kaamos, Dark Fortress, Deviant, Deviser and many local underground bands.

Watch the kick ass music video for King Of Emptiness at http://www.youtube.com/watch?v=ZwUOW_l1C38

For more on dark Vision please visit www.darkvision.info
Posted by Citywide Blackout at 5:22 AM