Three days later and I’m still reeling from the awesomeness that was this year’s New England Americana Festival (yes, I said awesomness, I’m the head writer).

This year’s fest showcased 35 Americana performers from all over, some familiar faces, and others that are new to this great organization. For three days (March 31-April 2) bands like John Colvert and the Great Brighton Fire, Highway Ghosts, Treat Her Right and The Rationales played to a packed house at Church. The fans showed their love each day, not leaving until the last set was done.

The NEAF got it’s start last year at the same club with a similarly-packed festival. Since then, founders John Colvert and Noel Coakley have been hard at work giving the local Americana scene a place to call home, and the opportunity to network with other musicians. Along with the fests, they also help put together smaller shows throughout the year under the NEAF banner, showing one and all that this is a movement that is here to stay.

I was only able to catch two out of the three days, but the bands I saw blew me away. Check out the 250+ photos I've got on the Citywide Blackout Facebook page. It’d take me forever and a day to reap all the action, so here are just a few of the highlights:

John Colvert and the Great Brighton Fire: It’s my hope that the work Colvert and Coakley have done in bringing the city’s Americana artists together will hopefully resonate for years to come. He played a power-packed and soulful set, and towards the end, Jeff Byrd (Jeff Byrd and the Dirty Finch), Coakley, Dave Deluca (Highway Ghosts) and Jason Basiner (This Way) took the stage for an all-star song.

The Rationales: I first heard this band at last year’s NEAF, so I was happy to see they were making a second appearance. David Mirabella’s got great stage presence, and the band brings a classic rock with a dose of country to the night.

Sarah Blacker and Abbie Barrett: I don’t want to be cliché and call these two a dynamic duo, but there are two of them, their style is dynamic, so hey, it fits. Run with it. The audience was packed for this set, as Blacker and Barrett demonstrated their wide vocal range and ability. They aren’t just playing the music, these two are living it. During the set, they covered “Banks of the Ohio,” a 19th century ballad about murder, prompting Sarah to joke that more than a few of their songs are about death. I'll take a few steps back, just to be on the safe side.

Big East: One of the last acts of Saturday night, these guys brought a boatload of energy to the somewhat inebriated audience. Lead singer Jeff Vachon was barely contained during the set, and the intensity of this blues/rock fivesome was impossible to ignore. 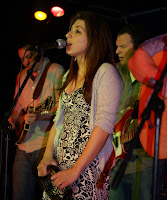 This Way: Headed by Basiner, this band has a whole new look, lineup and style. Simply put, they ripped the club apart during their set. Every member of the band moved to the music, and crowd quickly followed suit. I’ll be damned if I miss their CD release show on May 14.

Dennis Brennan: An familiar face in the local scene, this guys plays with all the chops of a seasoned veteran. The music is a mix of all the best ingredients of country and rock, and though his set came a little late in the evening, even the T-bound audience stayed put.

Sequin vests and hats: Nope, not on the bill for the fest, but a little added fun for us in the audience. Check the pics on mine, Deluca’s and a few other Facebook pages for more.And be sure to keep checking the NEAF site for more info on this amazing movement.

Posted by Citywide Blackout at 8:59 AM