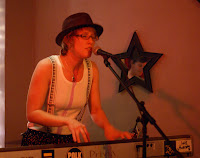 For those familiar with bands like Uh Huh Her, the So and Sos and Catie Curtis, a new organization has come together to give a new voice to these musicians.

From photography exhibitions to shows around Boston, the Queer Women in Music (QWIMB) movement has the city’s female musicians front and center. Run by Tina Lafleur, QWIMB wears more than a few hats. The recent Queer Bonanza at T.T. The Bear’s Place in early February drew a solid crowd with five different acts (Betty Widerski, Jordan Clements, Brief Awakening, Roni Pillischer and Happy Little Clouds), and more is planned in the near future.

“There have always been queer institutions, with the universities,” said Lafleur. “This is definitely a place that attracts music.”

Lafleur burns the rest her midnight oil researching other musicians either from the city or who have played there from the 1970s and on, and in doing so contributed to this aspect of the city’s music.

“It’s mostly been word of mouth,” said Lafleur, referring to how news of QWIMB has spread.

A volunteer with the History Project, Lafleur is focused on putting together an exhibit for the QWIMB movement, with long-term plans of guest speakers and a book on the subject. Lafleur a former employee at Newbury Comics, she’s been exposed to music of all kinds and said the connections there have helped her learn of other performers She also hopes to work with the city’s gay/lesbian/bisexual/transgender organizations, adding that the response to the T.T.’s show and her work have far exceeded her expectations.

“I didn’t realize the bands were here,” Lafleur said, adding that many have responded to her requests for photos and information.

Lafleur has started a Facebook page for QWIMB, and some musicians involved have posted photos, videos and links.

The History Project’s recent work focuses on the history of same-sex marriage’s struggle in Massachusetts and the history of Boston’s Pride celebration. It recently launches Above and Beyond, an exihibit documenting the triumphs and tragedies of those committed to fighting against HIV and AIDS.

For more information on Queer Women in Music, visit facebook.com/QWIMBb. Visit www.historyproject.org for more on The History Project.

Posted by Citywide Blackout at 5:44 AM